What follows are the notes from my talk at the Sydney Cocoaheads meetup, March 17th on Unidirectional State Flow in Swift - programming without paradox.

It was such an encouraging group to talk to. Interestingly, most people followed along, but I wasn’t expecting such a ‘penny-drop’ moment with the demo. Maybe I should have started with the demo?

Slide content has not been transcribed, and some slides have been left out for the sake of brevity. Links are listed inline where possible. 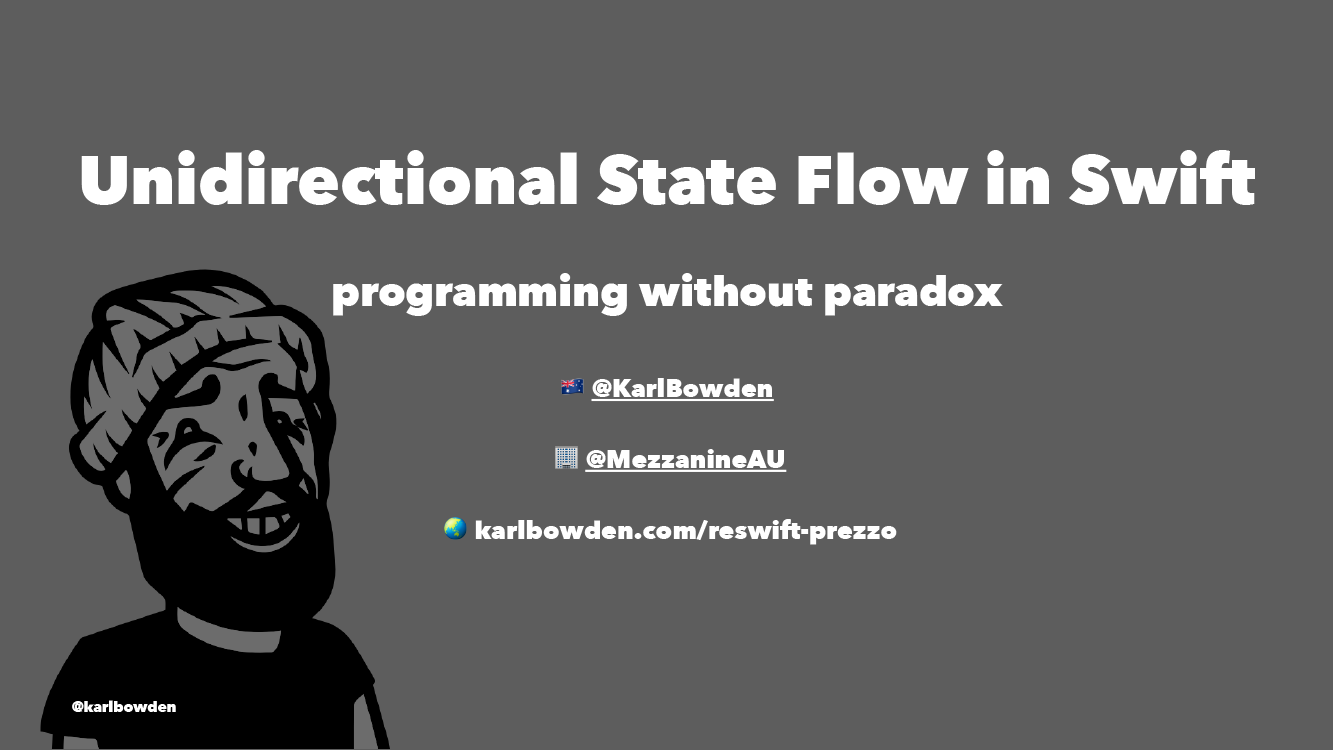 What am I doing? Encouraging experimentation, with a lightening introduction, to the principles of Unidirectional State Flow, and how they apply to application design in Swift. 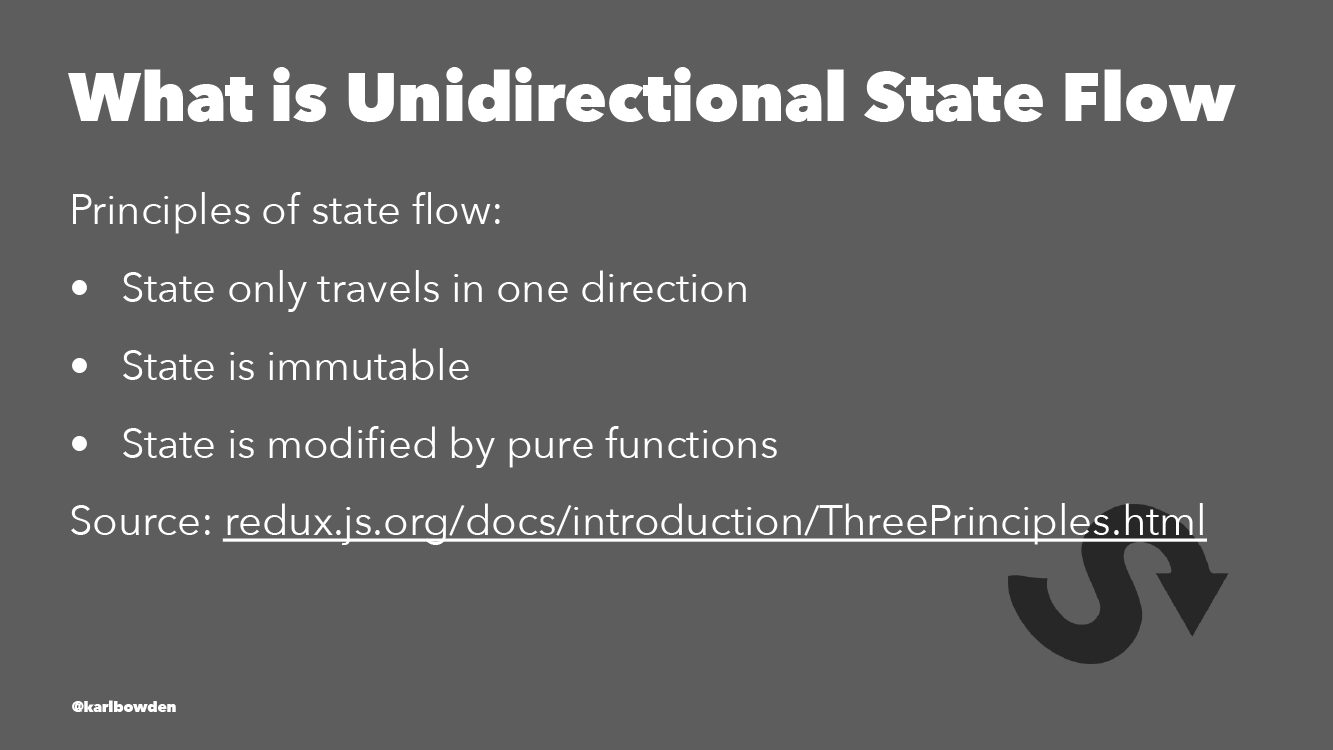 What is Unidirectional State Flow?

It is a set of principles for controlling state handing in applications.

Variations have been around for a while. The one we are interested in is Redux, the JavaScript framework by Dan Abramov. Other variations can also bee seen frameworks like Elm and Cycle.

At a high level, the base principles we are concerned about are

The last two might sound contradictory, so, before we jump into the application of these principals, it helps to understand what we mean by State. 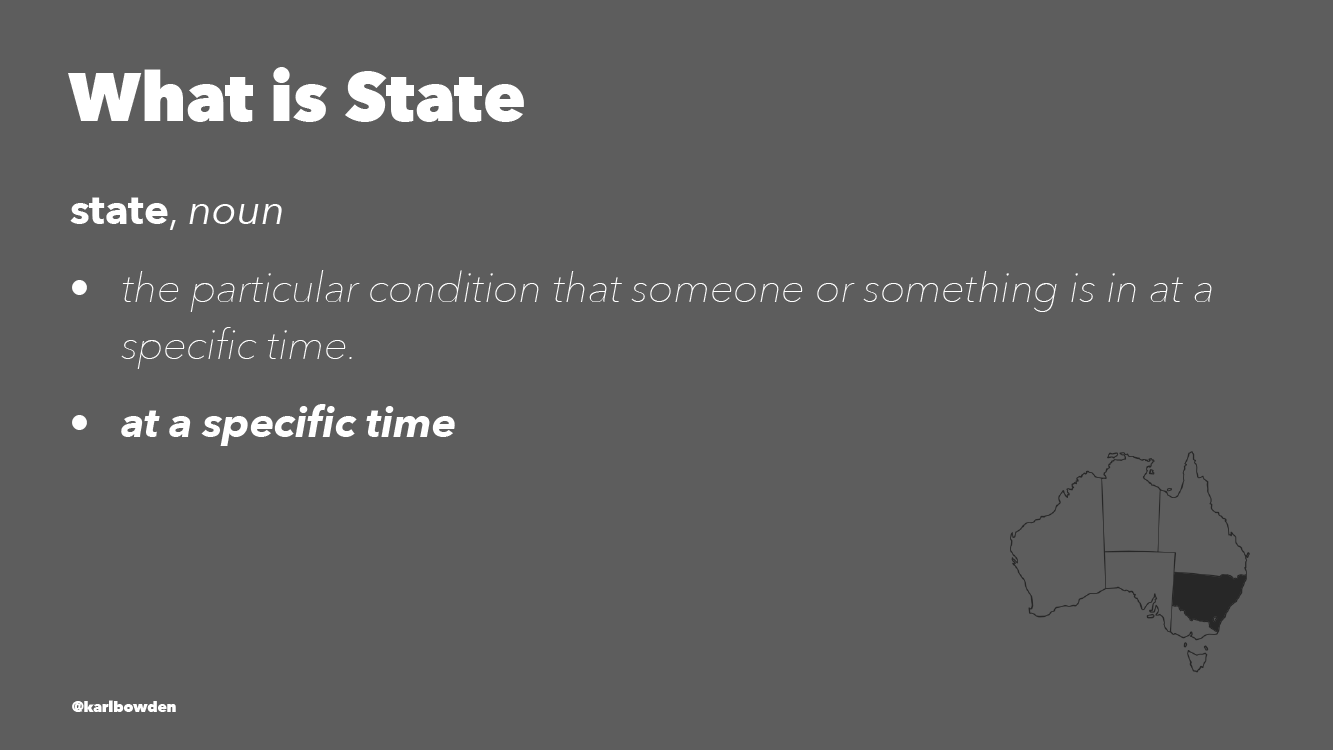 state, noun
the particular condition that someone or something is in at a specific time.

Notice those words? At a specific time. They are very important words that are often missed in the definition of State. Because:

Although state changes over time,
the state at any particular point in time is fixed. 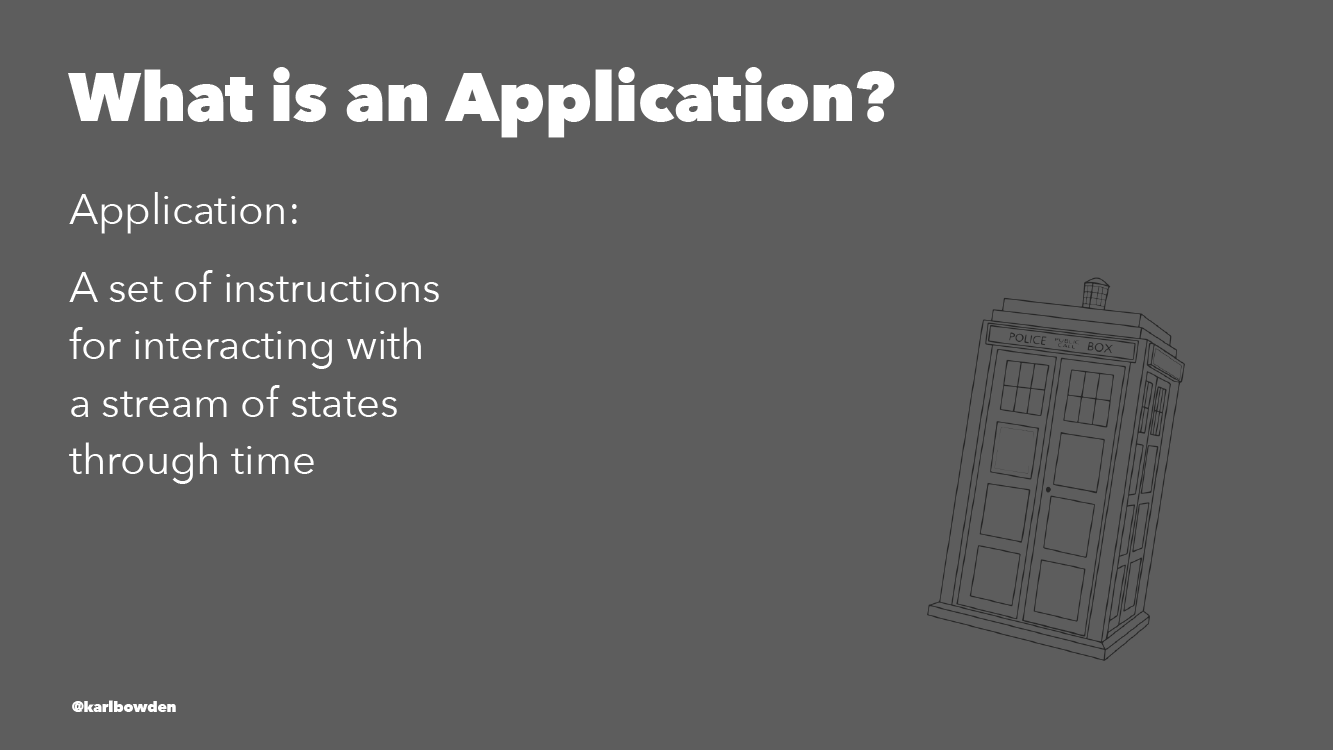 Therefore, the whole idea of creating an application revolves around time streams.

An application is, at it’s heart, a representation of a stream of states through time, that a user can interact with.

But we all write applications already. So what is the big deal then? 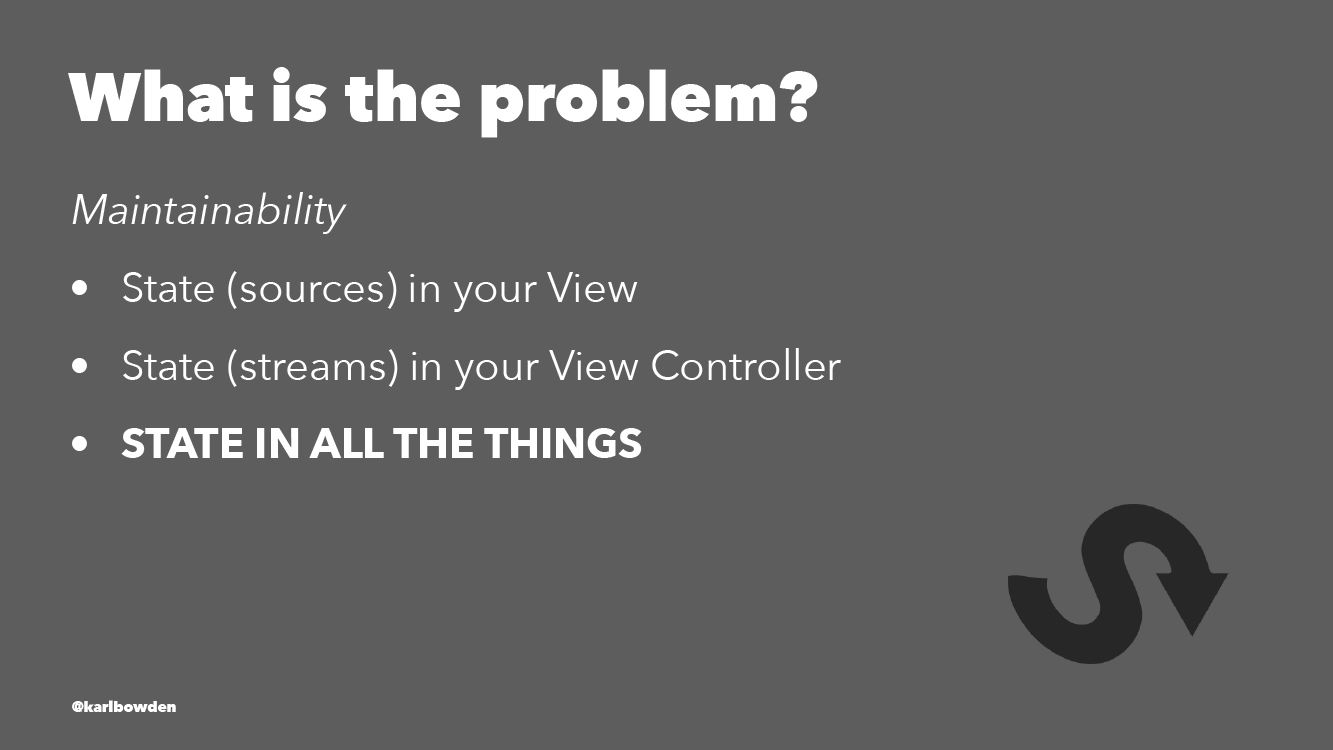 When learning application development, there is so much minutiae to deal with. And as programmers, we are often stubborn, and impatient.

Because we have so many other things to remember, we want to get concepts up and running quickly. Which leads to either not knowing how to, or not getting around to refactoring for maintainability.

It leads to state in your View. But we know that in MVC we can solve this by refactoring. And now you have Massive View Controllers.

But we can refactor that too. And now there’s state in all the things. 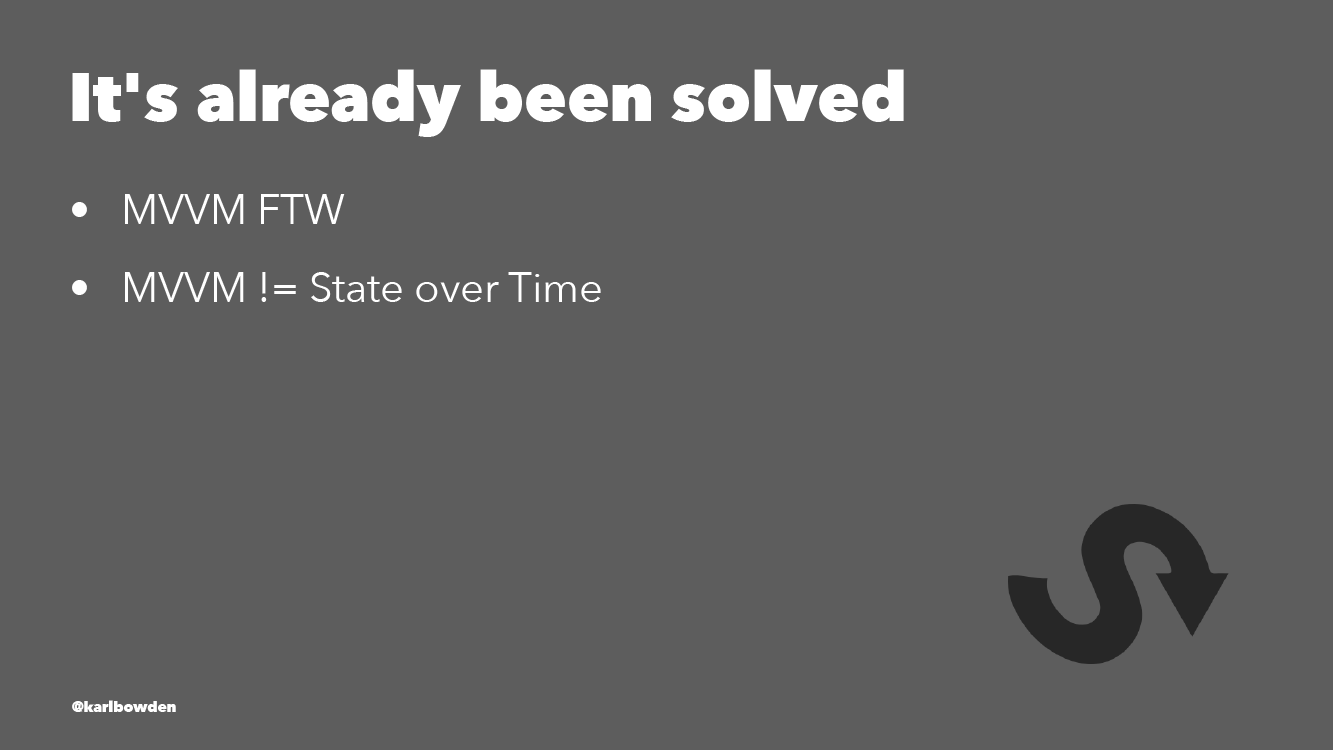 Hasn’t this already been solved?

Yes, we have MVVM!

But MVVM is about the separation of concerns, between views and models - and that includes state, but it does not specify how to handle, and interact with, a stream of states over time.

By now you have probably guessed, this sounds a lot like an advertisement for Functional Reactive Programming. 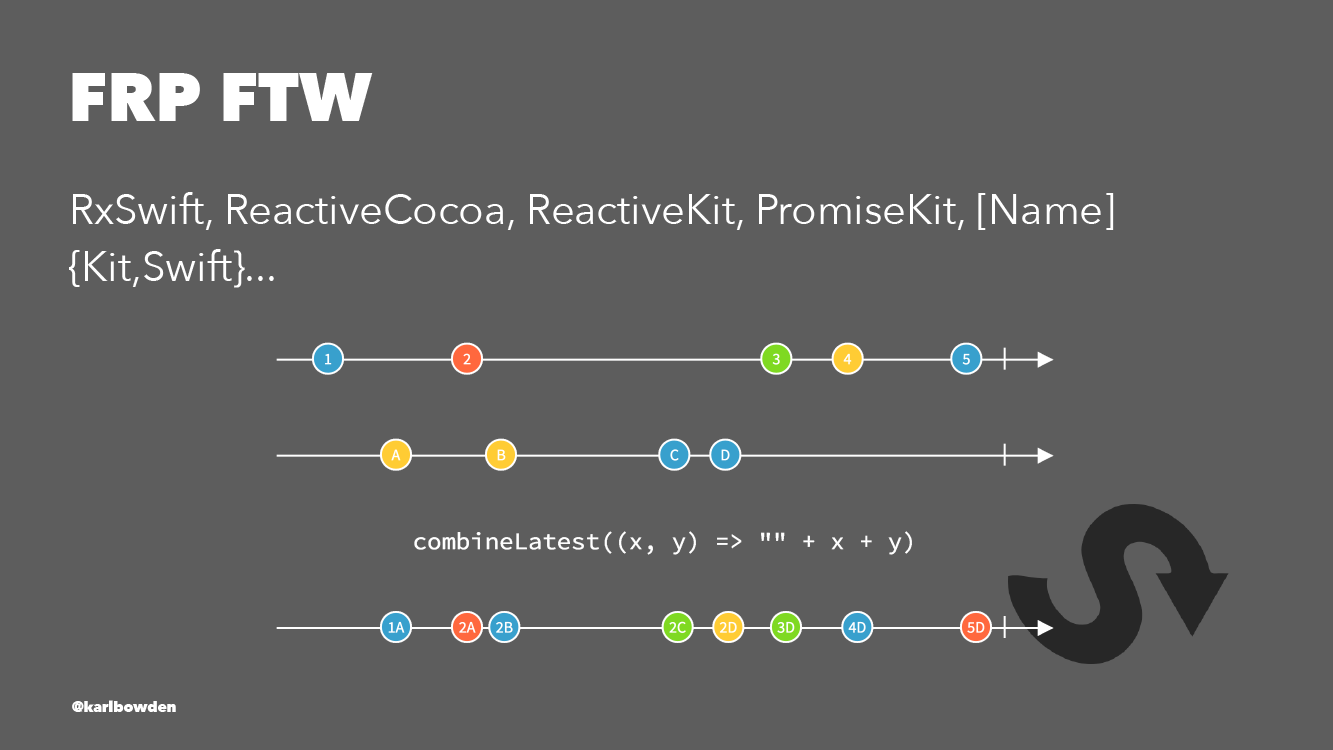 And that is because your right.

FRP is all about dealing with a stream of values over time in a functional and declarative way.

Remember our definition of an application? An application is a representation of state over time.

We see these abstractions a lot in other fields too, such as Physics.

Speed for example, represents a measurement of distance over time. With time being constant and moving forward.

Think about the concepts and how they relate: 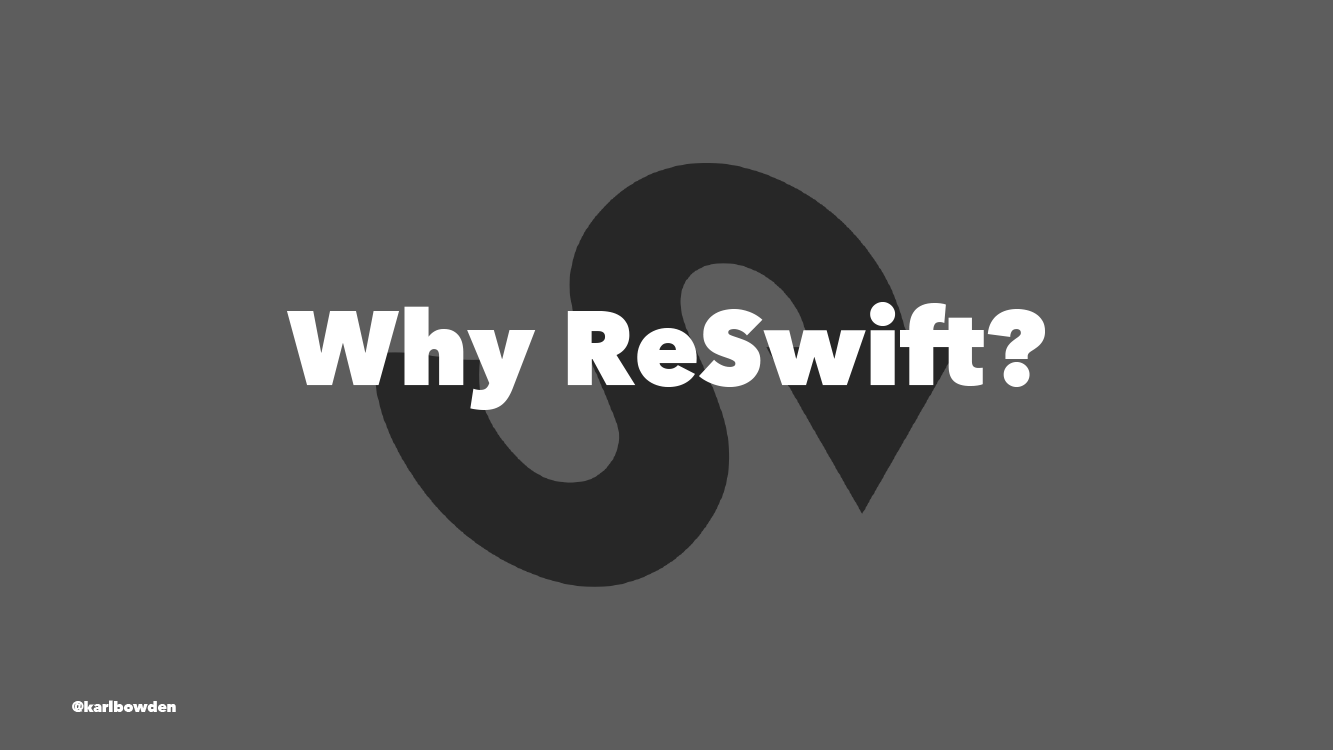 So….. If we already have reactive frameworks, then why do we need ReSwift? 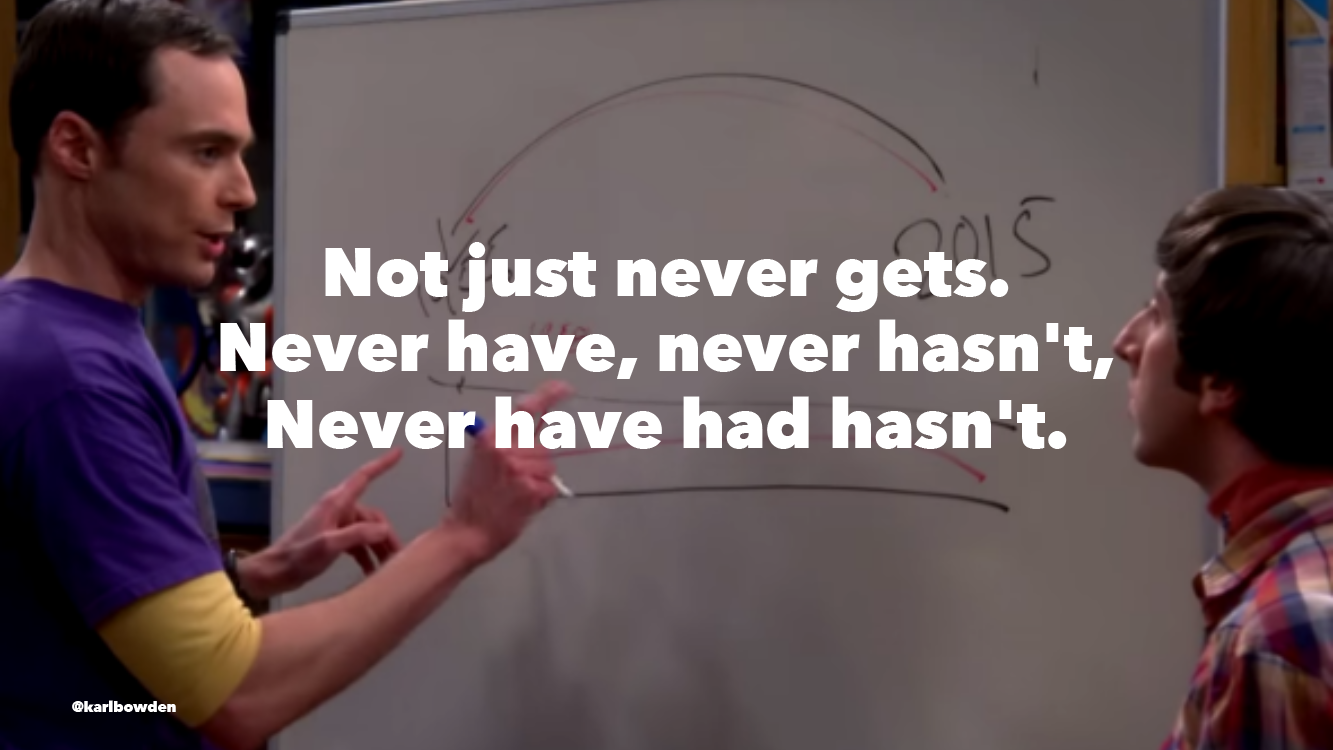 As soon as you have multiple sources or streams of state, there is nothing stopping them from mutating, deviating and creating forks in the continuum.

Now you have a potential paradox. 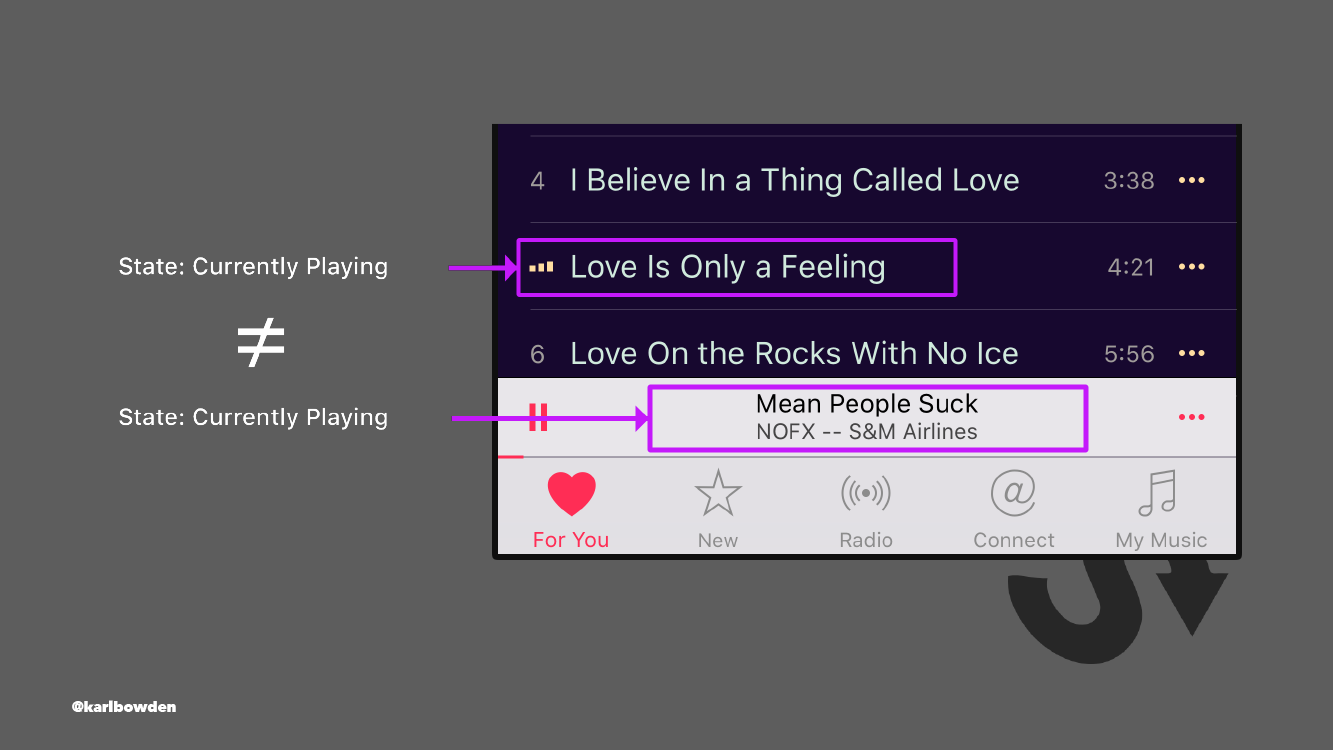 And by paradox, we mean this. The state stream has forked somewhere and now both these the components are doing what they are told, but displaying different state. If they are streams can’t we just join them back up?

You could if you have paradox driven tests, but until then, I think we all know how dangerous it is to cross the streams. 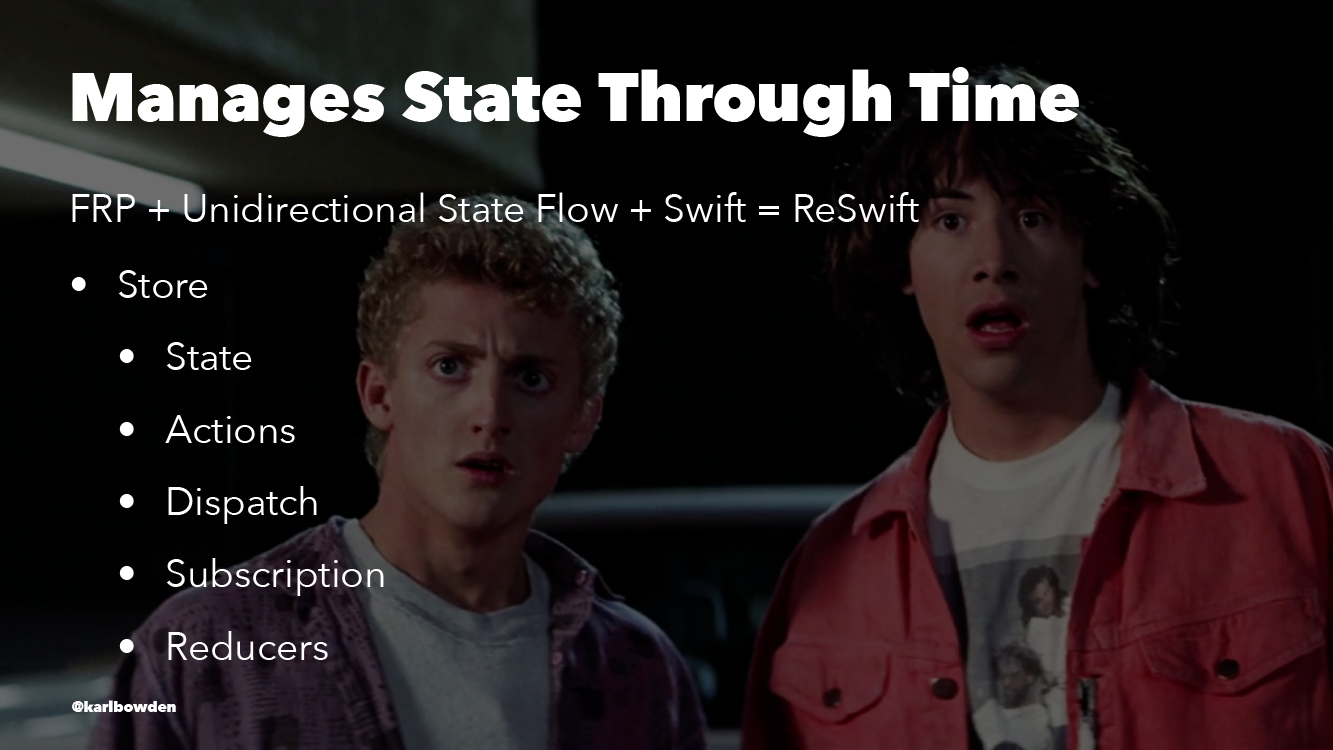 ReSwift is FRP for your whole application state, but simplified into Unidirectional State Flow principals.

In essence, it is the theory of relativity in a framework.

And it is: programming without paradox

But just like time travel, it introduces an abundance of terms that can seem daunting to start with.

So lets break them down and see how they all fit together. 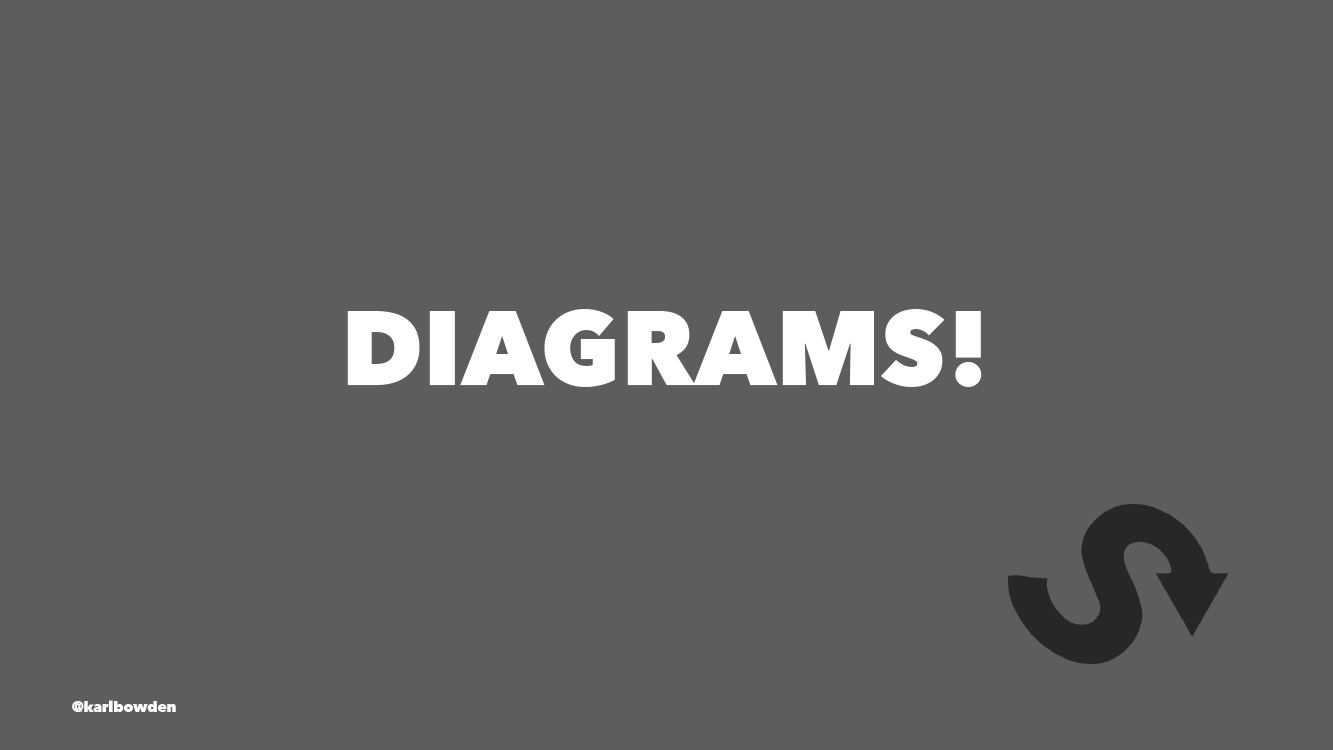 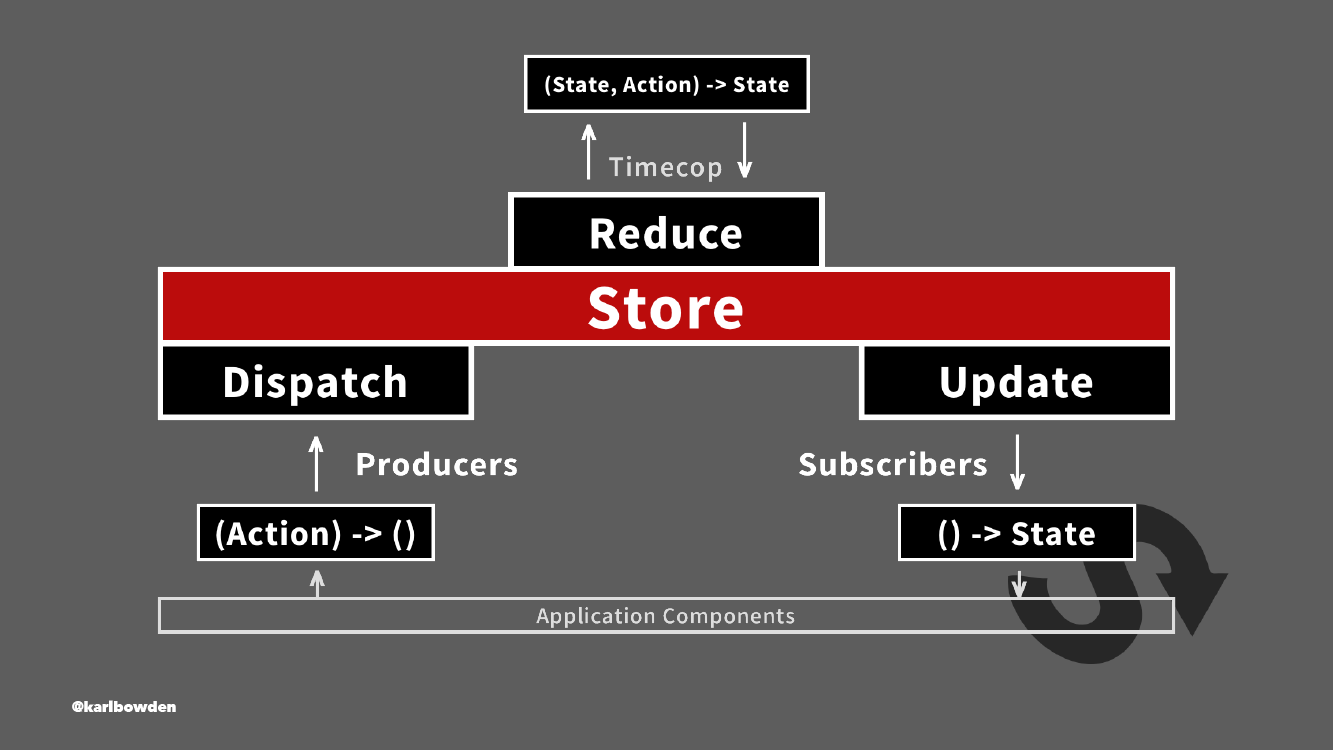 Most importantly, this is your store. It controls the flow of state over time. It is your TARDIS. It has:

Each component of an application, can only interact with dispatch, and subscribe.

But you don’t want to tie all of your application components directly to the store. That would defeat the purpose.

So using protocols each component can subscribed to, just a subset of the state that it is concerned about.

Store: controls the flow of state over time 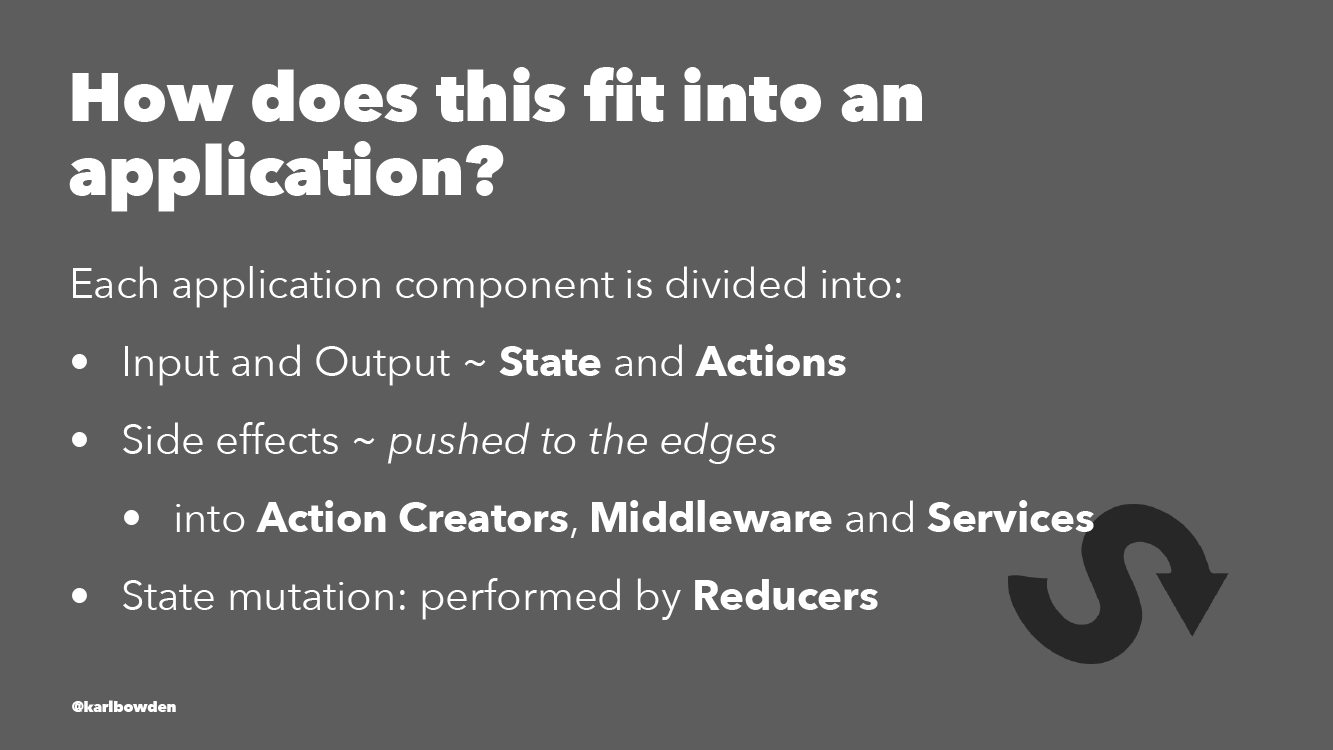 With our theory kinda on-track and store outlined, we need to divert and have a quick look at restructuring application components. In a Todo app for example we might have a List View and an Item View.

Each of these application components get divided into: 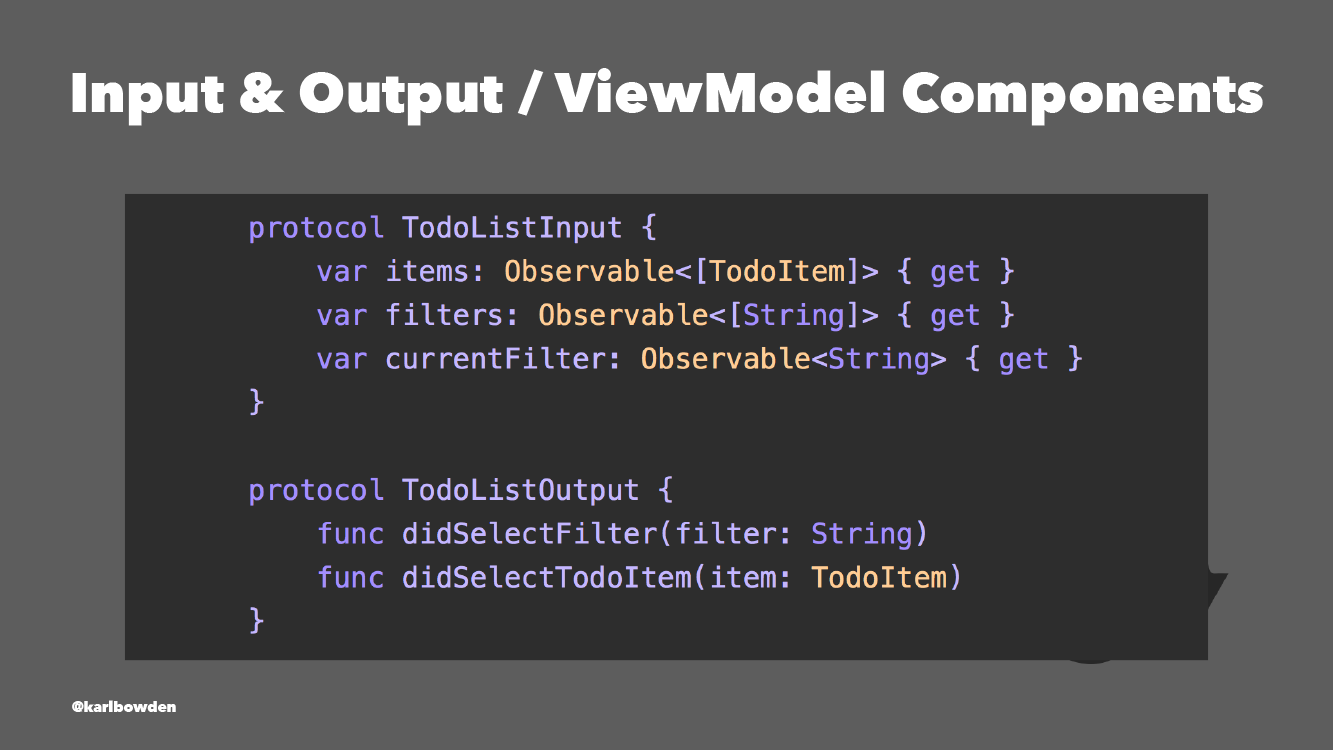 How do we decide what goes into State, Reducers and Action Creators?

The application state needs to provide enough information – at any point in time – to satisfy all of the application components displayed. So we analyse each of our components. Ask them:

This normally separates nicely into Input and Output, dependency protocols. You will probably recognise that it looks a lot like a View Model. When our component is connected to a view model that conforms to these protocols, it keeps it nicely isolated from the store.

For a Todo List we would likely have a list of todo items to display, a set of filters, such as Available, Overdue and Completed, and the currently selected filter.

The List would also produce actions – user initiated by touch events – such as when a user changes the filter, or selects an item.

Each of these sub-divisions, State, Actions and Reducers, are composable and nestable.

Each are simplified down to a single responsibility, then stacked like lego to create the store.

This means each component and store item is mockable, replacable, and testable in isolation. 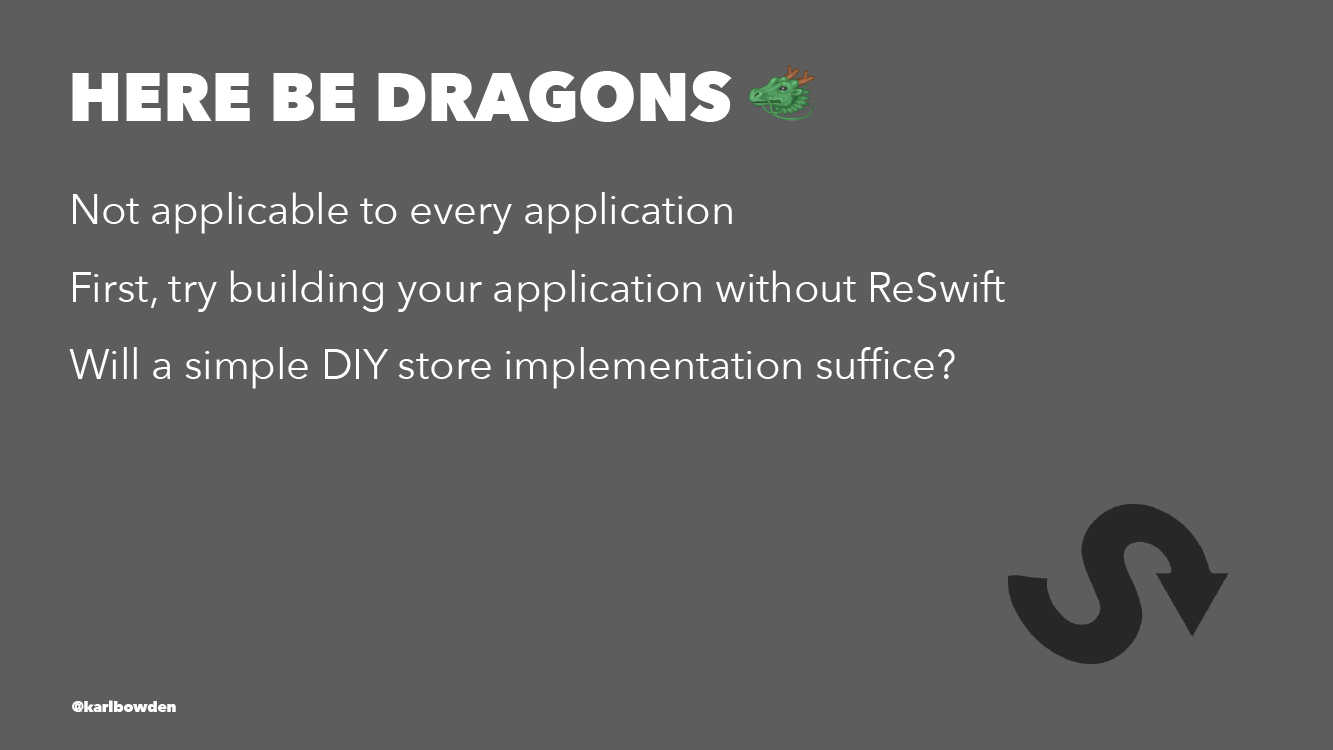 So far, I have shown a very over simplified explanation.

So before we continue let me preface the rest with some warnings.

I am NOT saying every application should be structured in this way. I am simply advocating experimentation.

ReSwift might be too complex or even too simple for your application, and sometimes even removing ReSwift is the right decision.

Suppose you were to go DIY and wanted to create your own store, lets look at the minimum you would need. 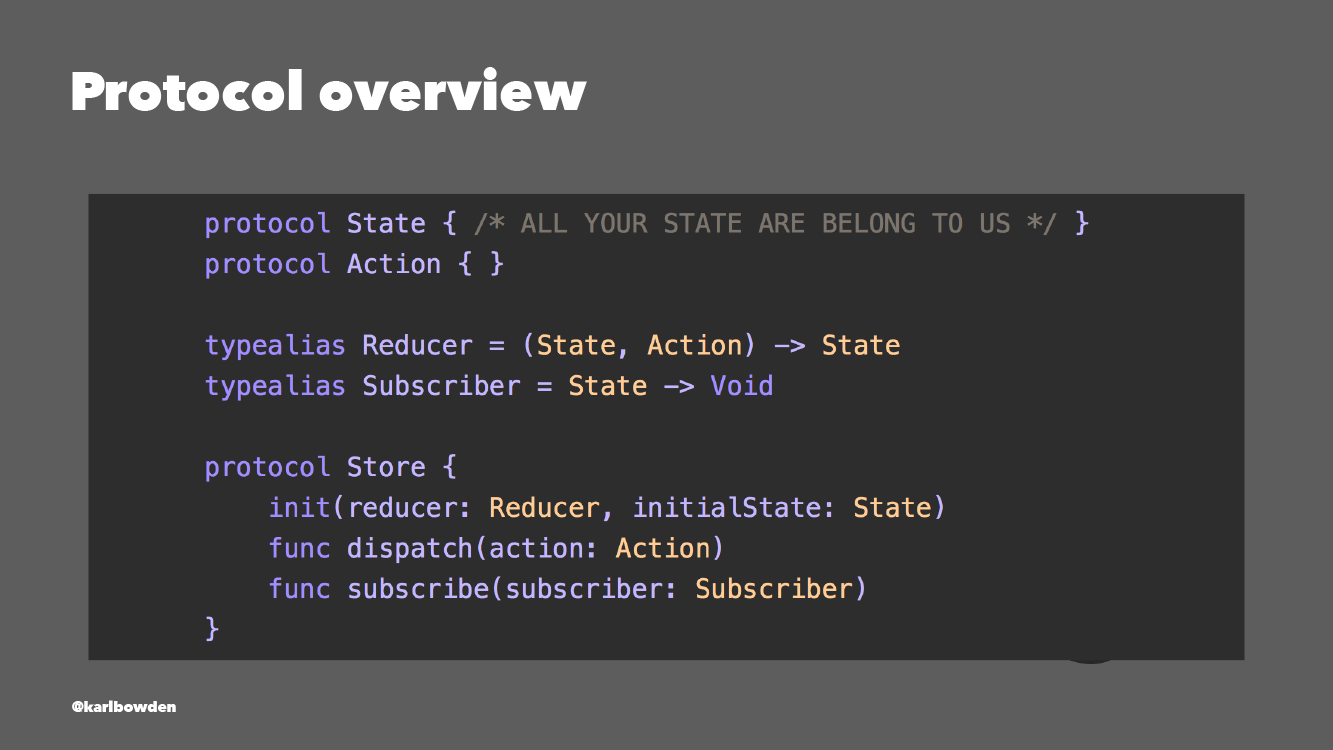 From our history lessons: 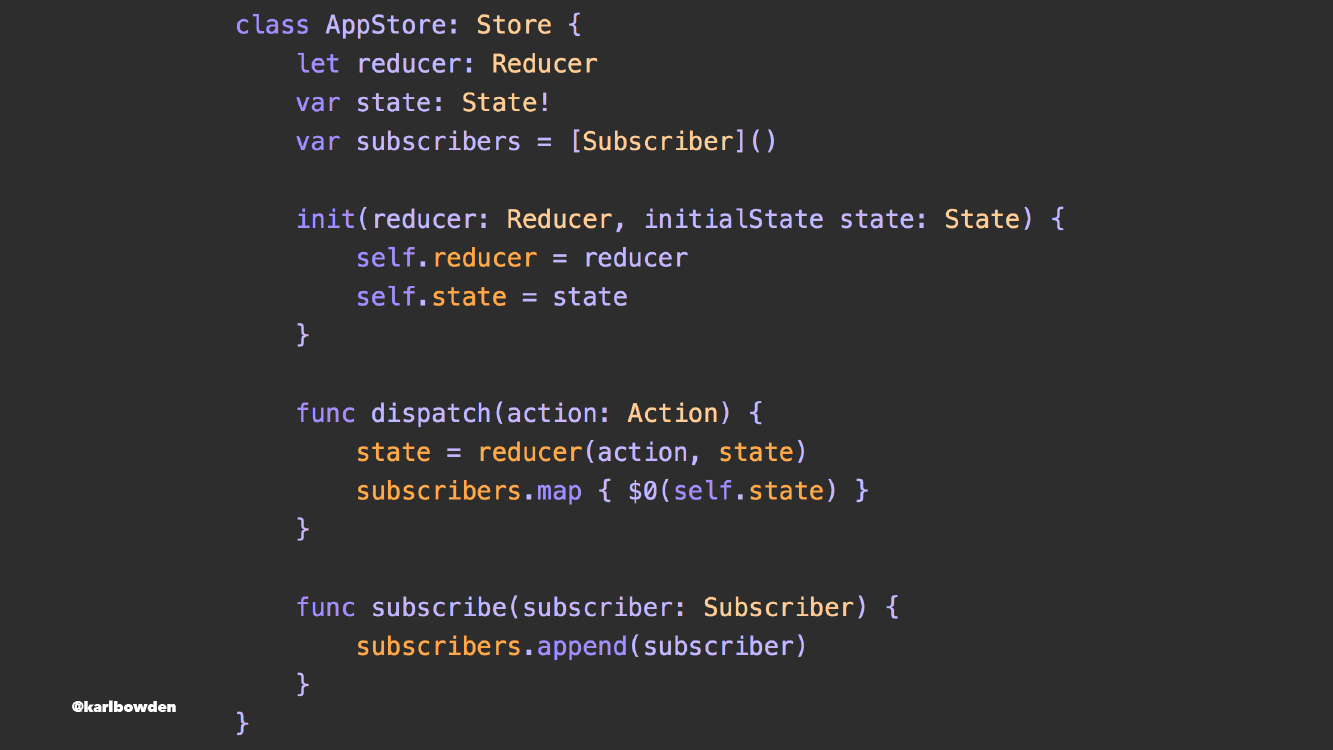 Then we just need to scaffold out a store.

It needs to be initialised with a Reducer and initial state

And components need to be able to subscribe to state updates, and dispatch actions.

That is it for the base Store. I know I glossed over the base types, we will see those in more detail in a future demo. 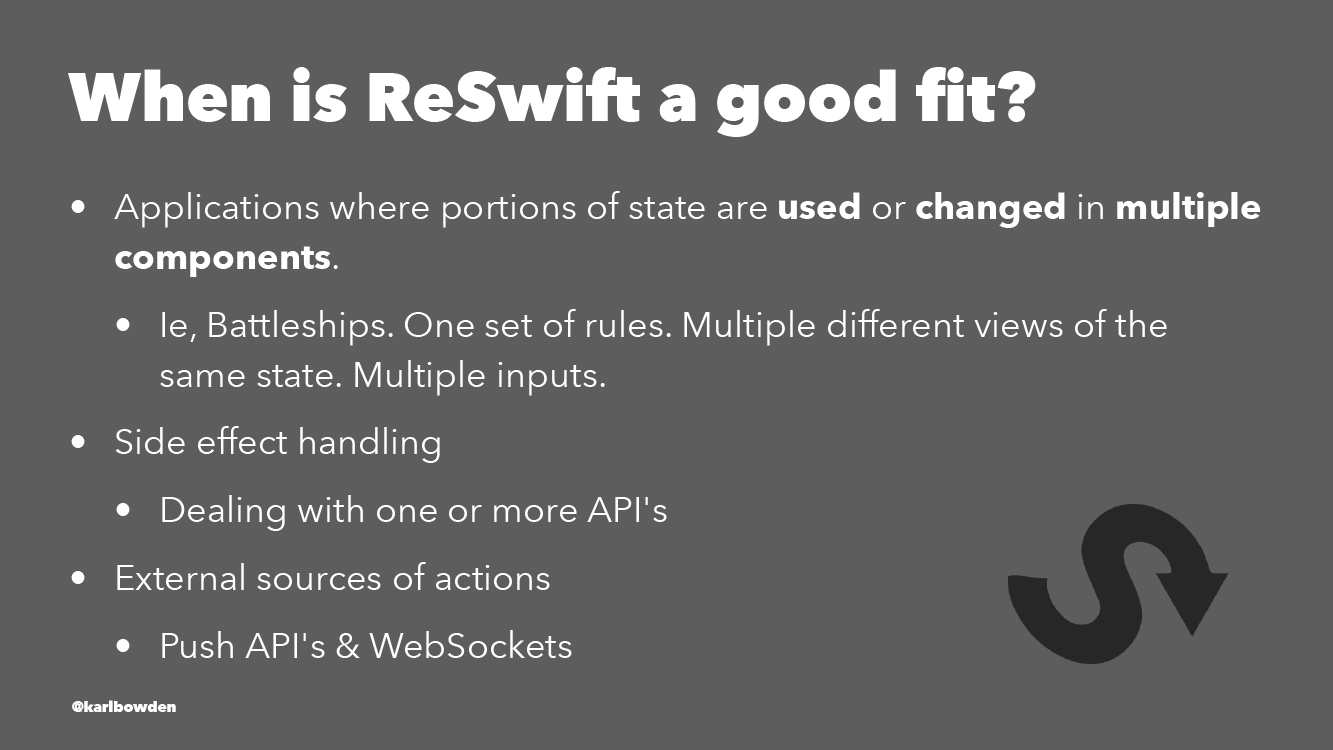 Finally, when is ReSwift a good fit?

And good for pushing side effects out to the edges of an application, such as dealing with APIs that you call, or that can push back in events. 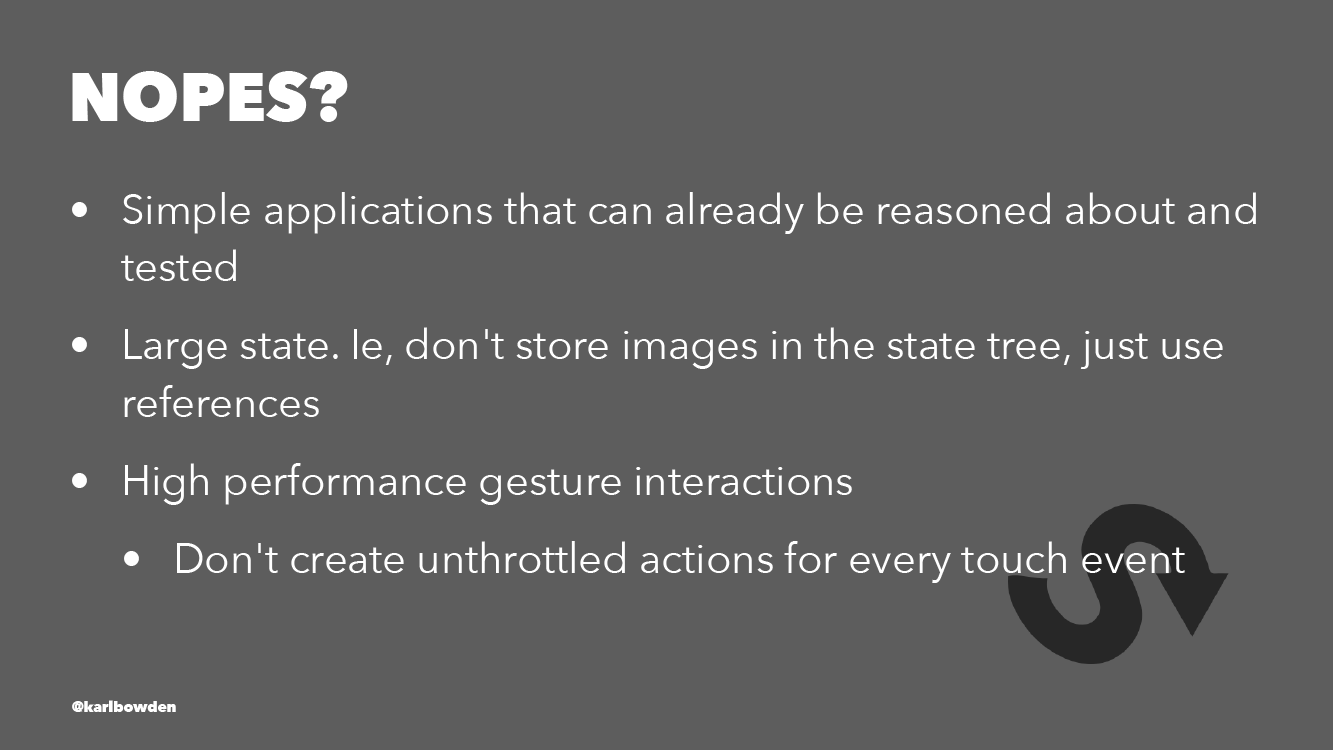 What is ReSwift not a good fit for?

Simple applications that can already be reasoned about in your head. They don’t need to be made unnecessarily complicated.

Applications with large state – such as binary data – that should not all be kept in memory at once.

Applications where you would have to deal with large numbers of unthrottled actions. Because it would require pausing time and running reducers every time an action is dispatched. 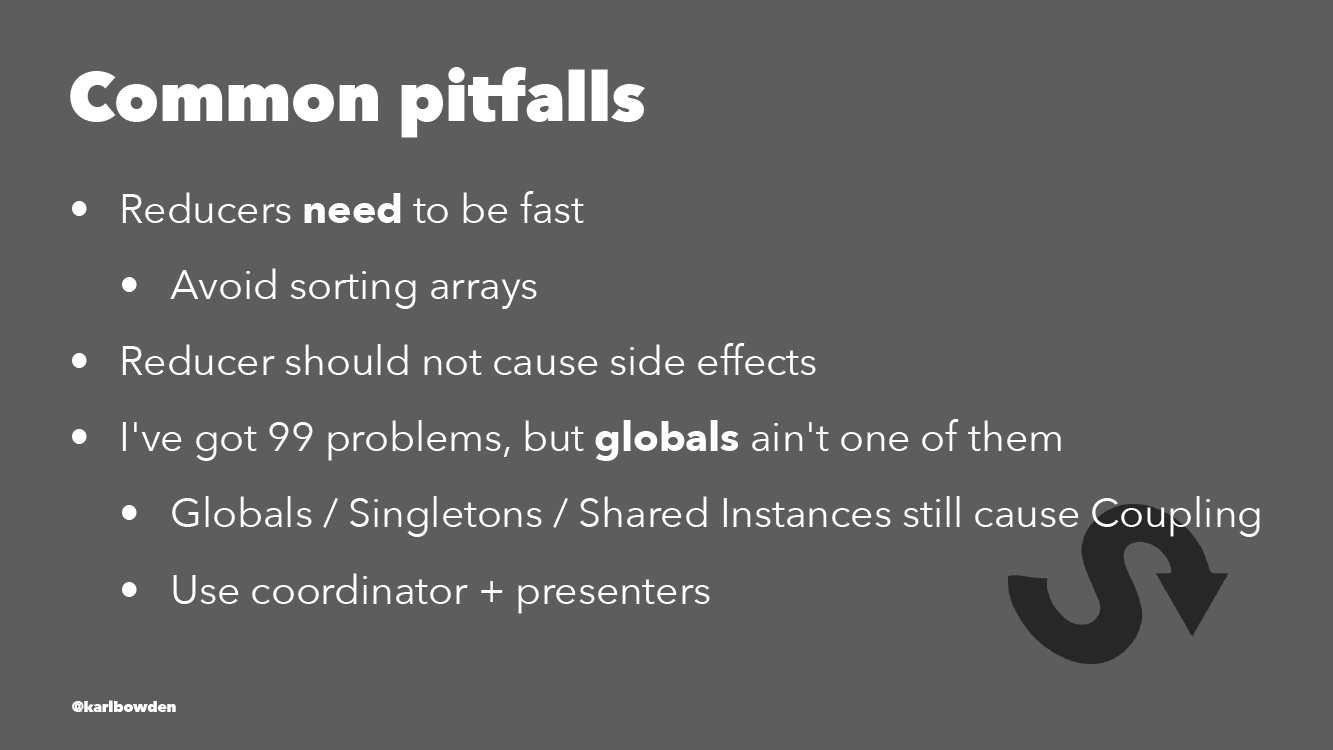 As you might have guessed, reducers need to be fast. You should not sort an array inside a reducer every time an action is dispatched.

Reducers should not cause side effects. Remember, time is paused. There are specific rules and safe guards to stop you from trying to dispatch a new action from inside a reducer and cause a paradox.

You still need to watch out for globals. They cause coupling, unknown side effects and make testing unnecessarily hard. And can easily be avoided using coordinators or flow-controllers.

Now for what you all came to see: the tooling around ReSwift.

Using a coordinator and router, lets us keep an application de-coupled, and recreate and jump to any stack of views in the application.

Then using the ReSwift Recorder for time travel we can record and replay actions and move through the time stream of an application.

My personal favourite is code injection - when I haven’t broken it. Although it’s not a part of ReSwift, it makes for a great combination when you can hot reload classes from both Objective C and swift. With KZPlayground you can also isolate view components and treat them like playgrounds inside the simulator. 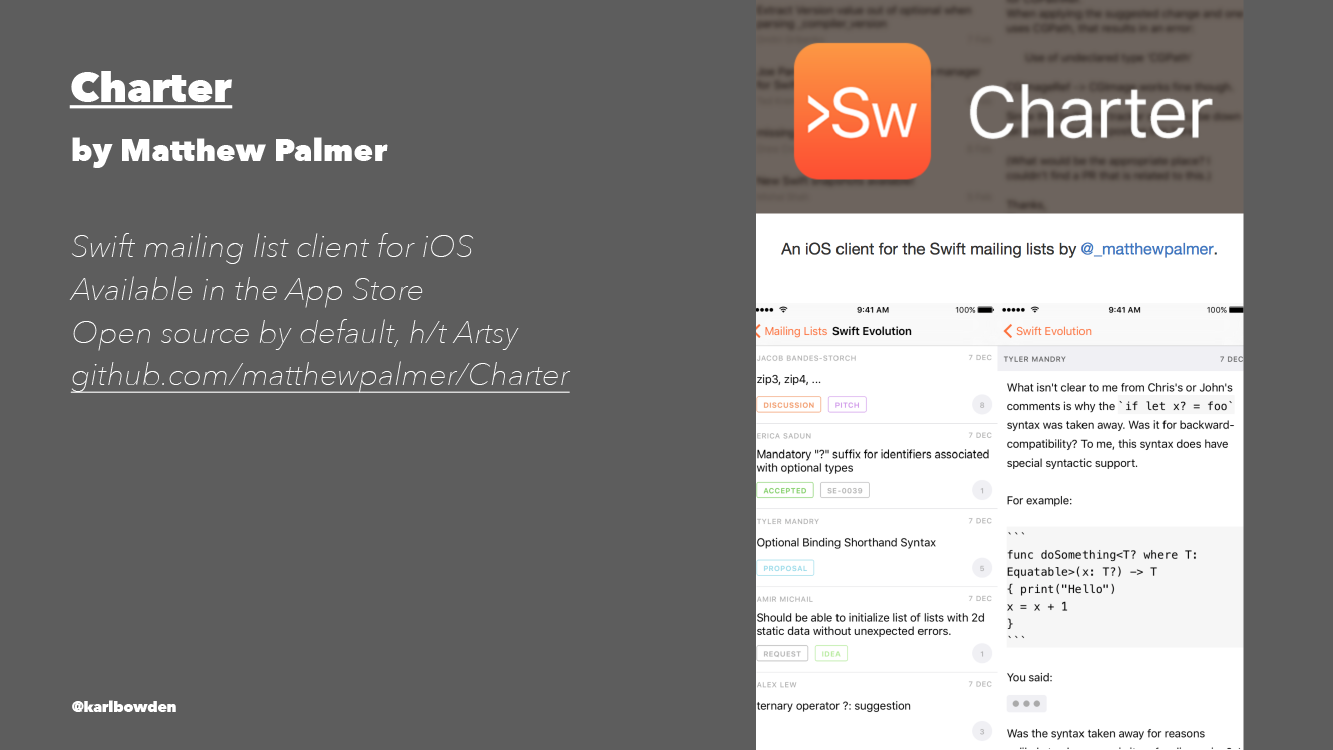 Do we have any good examples? Have a look at Charter, by Matthew Palmer:

Most interestingly, he recently made the decision to remove ReSwift to reduce the barrier to entry to new contributors. 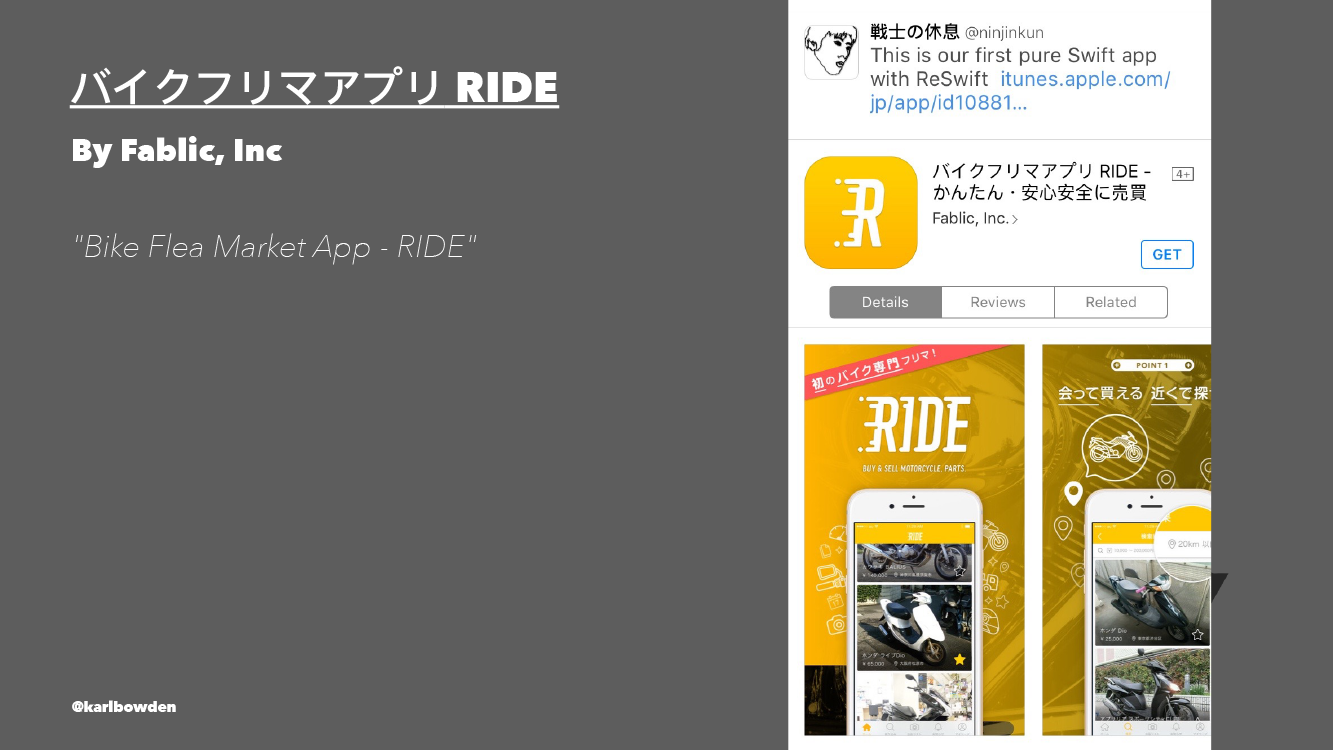 Now I need to make shout out to all our contributors. Especially Ben and Aleskander for generously allowing me opportunities to contribute during the early stages.

You may have heard of ReduxKit and Swift-Flow. They are the original projects by Aleksander and Ben that we merged into ReSwift. 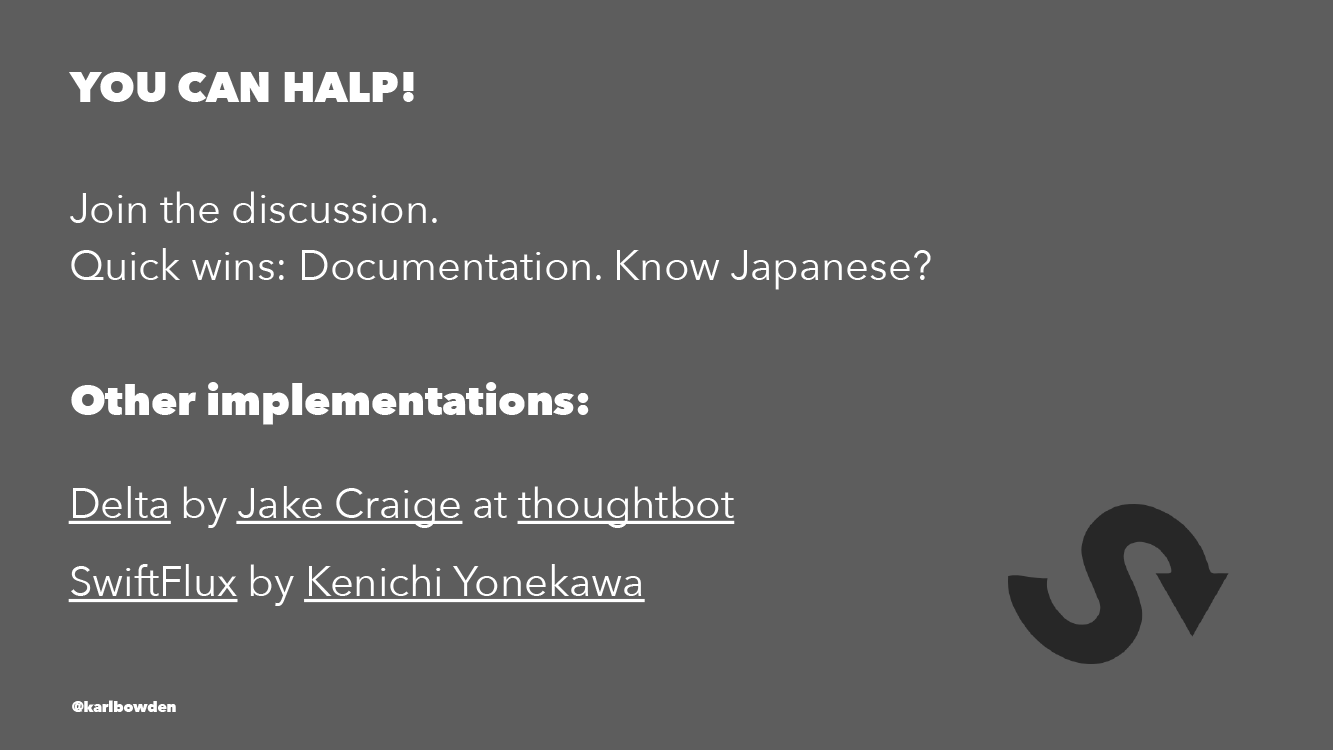 We welcome new contributors, and the discussion on GitHub is especially help full. Tell us what worked for you and what didn’t.

It also turns out ReSwift is big in Japan. I have no idea what they are saying about it, but I would help to translate documentation.

For similar projects, have a look at Delta by Jake Craige at thoughtbot and SwiftFlux by Kenichi Yonekawa.

SwiftFlux is based on the Flux framework that the inspiration for Redux was based out of. 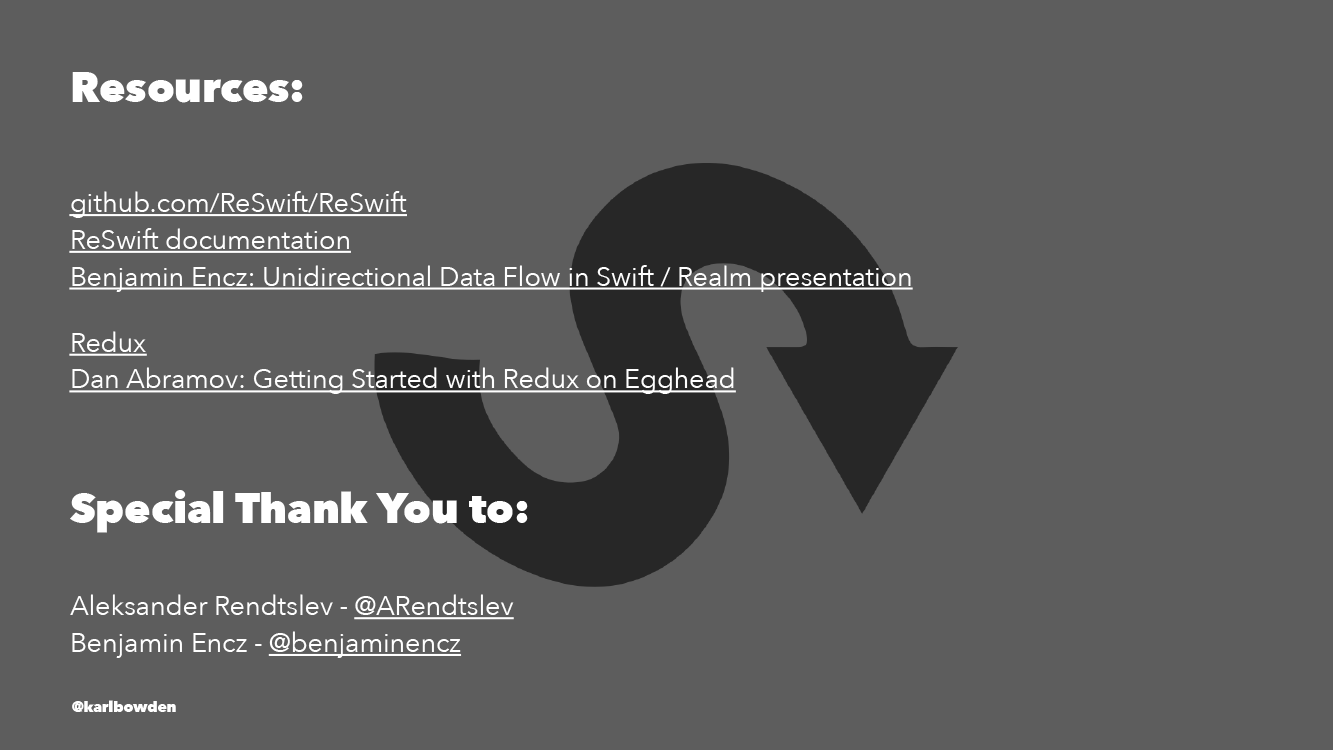 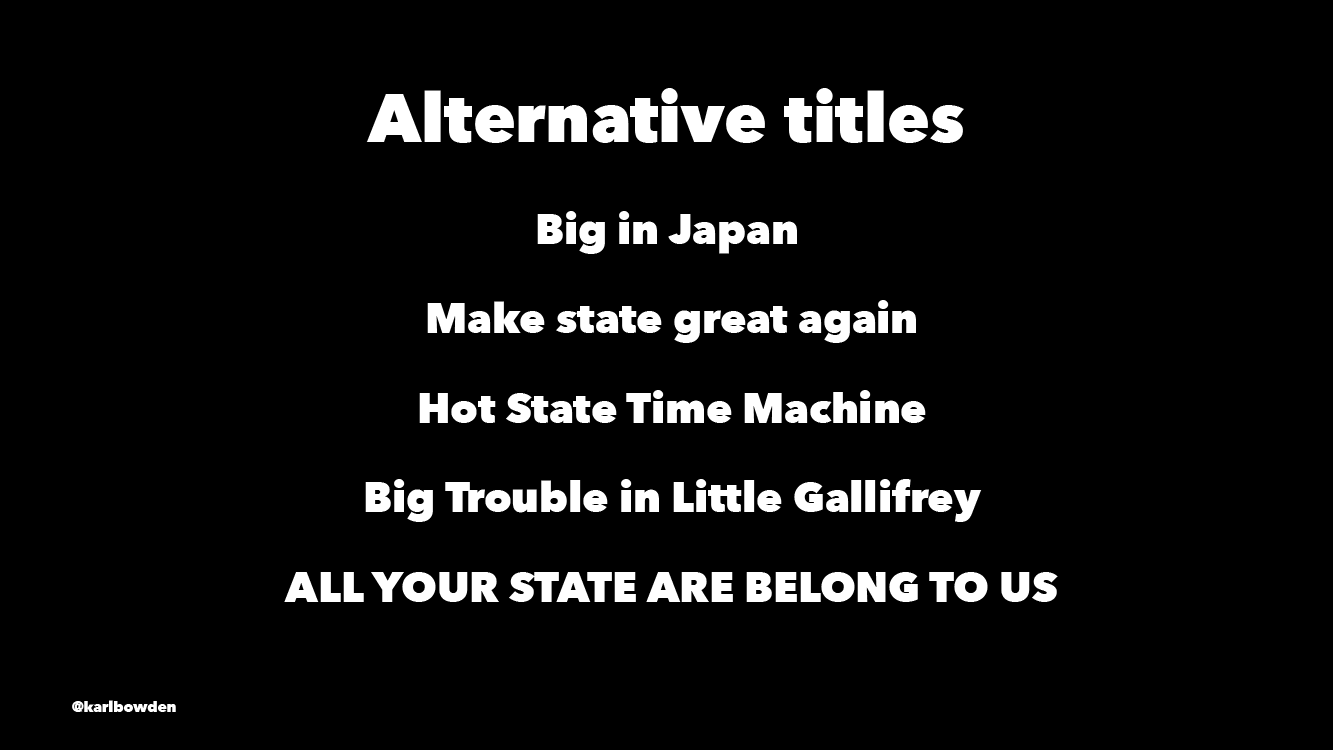